Johannesburg, 28 June, 2021: National Geographic is making a splash this July with the ninth annual Sharkfest. The must-sea summer event swims onto screens with Shark Beach With Chris Hemsworth on Saturday 3 July at 18:00 (CAT) and continues throughout the month with premiere shark programming every Saturday and Sunday from 18:00 on National Geographic Wild (DStv 182, Starsat 221).

Shark Beach With Chris Hemsworth follows the global movie star as he embarks on a personal mission to investigate how we can live more harmoniously with sharks. The one-hour documentary special from Nutopia (“One Strange Rock”) features shark icon and conservationist Valerie Taylor, who takes Hemsworth for a shark dive to experience firsthand the awe and beauty of nurse sharks, and other preeminent shark experts who are exploring new preventative measures and the latest technology to help stave off shark-human encounters.

With a super-sized four weeks of fin-tastic programming, featuring over 21 hours of new premieres, 60 hours of enhanced content and a treasure trove of archival footage, Sharkfest continues to highlight the captivating science and stunning cinematic visuals of the apex predators. 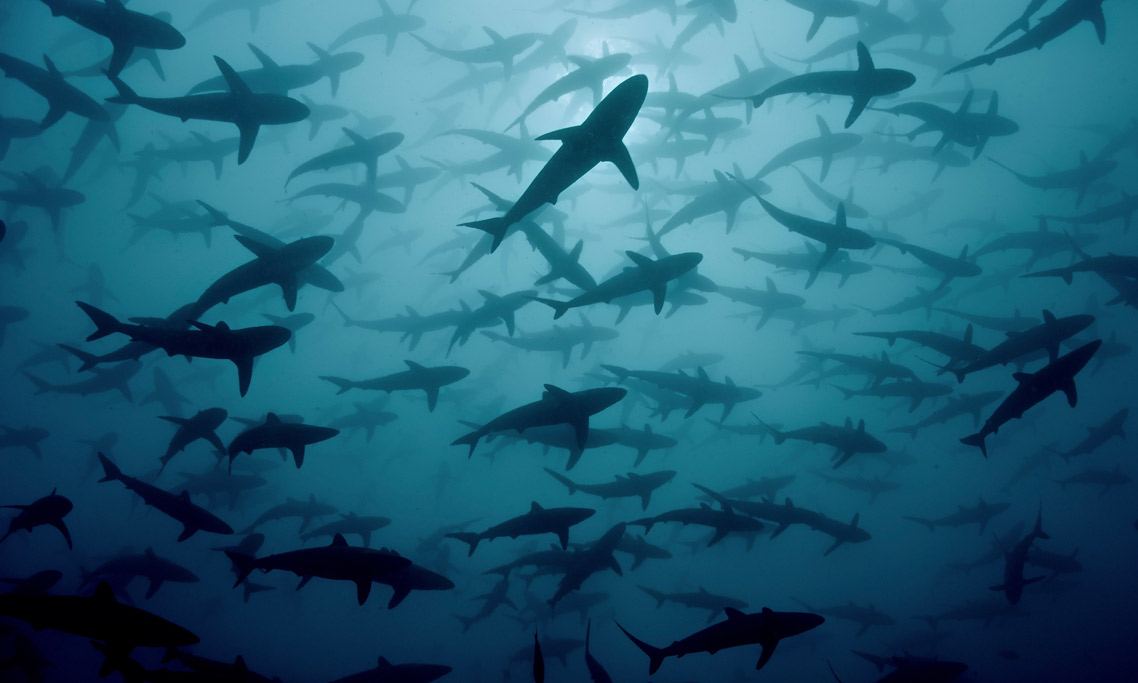 National Geographic’s jaw-dropping originals take viewers up close and personal with one of nature’s most feared and often misunderstood creatures. Other marquee special events include Shark Attack Investigation: The Paige Winter Story, where experts unpack the details of Winter’s attack and the inspirational story of how the teen remains an advocate for sharks, and the action-packed six-part series Shark Attack Files, which investigates bizarre and fascinating shark behavior. Featuring footage from actual attacks, interactions and behavior captured by both professionals and observant bystanders, every twist and turn leaves viewers sitting on the edge of their seats.

Additional highlights on National Geographic Wild include six new episodes of fin-favorite When Sharks Attack, which takes a look at why there are spikes in shark attacks; find out what happens when two of the deadliest predators face off in Croc That Ate Jaws; Shark Gangs reveals what is behind the shark behavior of hanging out in groups; and Rogue Shark? explores a series of shark attacks in Australia.

For the past eight years, Sharkfest has continued to shine a light on the science of sharks, giving audiences a better understanding of the ocean’s top predator while also featuring their true beauty, power and mystery. Putting science first, the annual event gives the real facts behind the fascinating predators and works with top scientists and advocates to inform and enlighten viewers.

This year’s great-white sized roster sharing their expertise and experiences include:

“The mysteries of the ocean’s most iconic predators are so vast, even with eight years of shark-focused content under our belt, there still remains more to be discovered,” says Janet Vissering, senior vice president of Development and Production, National Geographic Partners. “Like every year, shark scientists and oceanic experts have pulled out all the stops for this year’s Sharkfest, revealing new discoveries, shocking revelations and bizarre shark behavior never seen before. It’s going to be jaw-some!”

“National Geographic Wild’s Sharkfest has become a celebrated annual event for our viewers across the continent, adding to our rich premium wildlife programming that brings the world’s fascinating animals to screens,” said Evert van der Veer, Vice President, Media Networks, The Walt Disney Company Africa. “Few creatures holds a fascination as much as sharks and we are excited to reveal and explore more with exciting, intriguing and exhilarating specials.” he added. 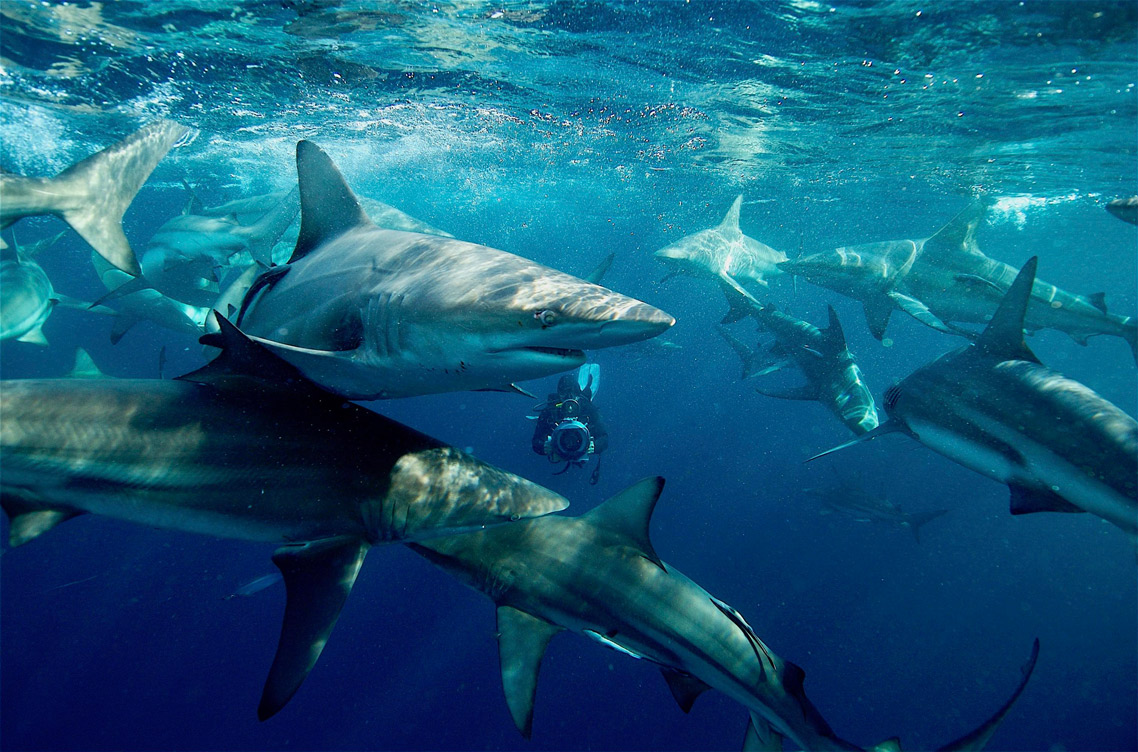 In this one-off special, global movie star Chris Hemsworth (Thor, The Avengers), embarks on a personal mission to investigate how we can live more harmoniously with sharks. Chris, an enthusiastic surfer and renowned environmentalist, is fascinated by the ocean’s top predator. But he’s equally perplexed by the dangers they pose to humans when we venture into shark territory. In Shark Beach (WT) Chris uncovers the complicated truth behind the alarming increase in shark attacks in Australia. Joined by surfers, conservationists, shark advocates and marine biologists, Chris begins his journey in his own backyard at Byron Bay, Australia. He explores new preventative measures and technology which can help stave off shark-human encounters. He dives with sharks himself and accompanies a tagging team as they handle a captured great white, helping release it back into the ocean. Chris’s mission to understand sharks is more than a journey: he’s searching for answers to help us live more peacefully with these magnificent creatures.

Every year, Galveston Island in south Texas greets upwards of 5 million visitors to its beaches. In 2004, the fishing, surfing and beach play were shattered when three locals were attacked by sharks just weeks apart. Shark attacks are rare off Texas beaches, so locals want answers. Experts examine what might have happened. Are the changes permanent? And will Galveston beaches ever be safe again?

The 100 miles of crystal clear waters just north of Miami, Florida is some of the most popular coastlines in the country. But in 2017, locals and tourists fell victim to a mysterious rise in shark attacks. Over the course of the year, 9 beachgoers were bitten. A team of investigators uncover clues in their search for the truth.

When Sharks Attack 7- Predators in Paradise. Saturday 3 July at 20:15

In 2016, sharks descend on the island of Maui, turning paradise into chaos. 7 attacks in 11 months – more than twice the previous ten-year average. Attacks are usually rare here. Experts investigate awe-inspiring, underwater volcanoes and ancient craters, from the bizarre, mutant sharks from Fukushima, to a dark secret about Maui’s sewage system. What they uncover could be because of global concern.

When Sharks Attack compilations – Trouble in Paradise. Sunday 4 July at 18:45.

The Bahamas is a dream vacation destination. But for some, the dream quickly becomes a nightmare. A string of shark attacks terrifies beachgoers and concerns experts. Investigators must find the cause, to save lives and help the tourist-dependent community.

When Sharks Attack compilations – Trouble in Paradise. Sunday 4 July at 19:30.

The tiger shark is the second deadliest species to humans, behind only the great white. In Hawaii, a string of tiger shark attacks has the community on high alert. Experts must find the reason why tiger sharks are biting humans, before the next devastating encounter.

In October 2018, the remote islands of the Whitsunday in Australia were rocked by a series of shark attacks. Incredibly, all the victims were attacked in the same small patch of ocean, no larger than four football fields. Was a rogue serial killer on the loose? Or was something new drawing sharks and humans into conflict?

San Diego, California is one of the most visited coastal destinations in the country. But in 2009, this community was rocked by a spate of shark attacks. After a deadly incident the year prior, there were six bites in just over six months. A group of experts revisit the accounts to determine the cause of the spike.

Jacksonville, Florida’s amazing beaches are the best-kept secret in the South. But this peaceful paradise was rocked in 2015 and 2016 when twelve shark attacks defied the odds and left locals searching for answers. From surfers to swimmers, experts re-visit the circumstances of these attacks and search for answers.

In 2009, fear grips Australia when sharks terrorize the coastal community of New South Wales. 17 attacks over the course of the year – more than four times the annual average. Interactions with sharks here are usually rare, leaving experts searching for answers and what they discover could impact beach-goers around the globe.

In Fernando do Noronha, offshore Brazil, lemon sharks have mastered the art of catching sardines in the surf zone… with the help of unexpected allies!

Sharks are invading Carolina waters, leaving experts searching for answers. Strings of shark attacks in North and South Carolina threaten beachgoers as well as the tourist-driven way of life for coastal communities. The mystery behind the attacks must be solved, but the problem may be more dire than anyone could have guessed.

When Sharks Attack compilations – Most Shocking Spikes. Sunday 11 July at 18:45.

The most shocking strings of shark attacks ever recorded may help experts prevent future attacks. The Jersey Shore 1916 attacks inspired the most infamous shark story in history, Jaws, but the real-life tale is even more terrifying. A string of attacks in Sharm El-Sheikh Egypt leaves experts dumbfounded, but all is not what is seems. And history may be repeating itself with a double-shark attack in New York.

We’re all familiar with Jaws. But the Great White is not the only shark to rule the oceans. We’ll watch Wobbegong sharks go tail-fishing and Epaulet sharks walk on land. From the tiger shark that chews through metal to the reef tips that prowl in packs…sharks come in 500 different shapes and sizes and many are top-notch hunters in their own right.

Cage diving is a popular way to see sharks – until they ram, bite or get behind the bars. A few key factors may explain this troubling behavior.

Most shark attacks happen near shore and more sharks are being spotted on beaches across the world. Could sharks one day step onto land?

Shark experts examine the jaws of the world’s three deadliest shark to determine what about a shark’s bite is so deadly.

For years sharks have been viewed as solitary predators, but scientists have recently discovered a surprising new behavior. In this special, we reveal how this apex predator likes to hang out in gangs. So what is behind this behavior? Do sharks enjoy a social life or are they working together to become even more effective hunters?

50 Shades of Sharks reveals facets of sharks that are rarely chronicled; they’re fragile, delicate, ingenious, collaborative and even clumsy at times.

By some estimates, the Oceanic Whitetip has attacked and eaten nearly 2 000 humans—more than the Great White, Tiger and Bull sharks combined. But could the “Most dangerous of all sharks….” be even more dangerous?

Never-before-seen footage explores the most astounding shark attacks from the last several years – and how each victim fought back.

Over the past two decades, there have been multiple instances of sharks attacking humans in pairs– is there something fishy going on?

Marine Ecologist, Dr. Neil Hammerschlag teams up with former Royal Marine Commando, James Glancy and Evolutionary Biologist, Dr. Toby Daly-Engel to uncover how Big Bull, one of the largest Bull Sharks ever caught, grew to become a giant and find out if there could be more like her.

A living Eden for all creatures, including one of the most misunderstood in the entire world – the shark. Some 40 species call these waters home, and so does world-renowned wildlife cinematographer Paul Atkins. This film will take us from the remote reefs of the Hawaiian archipelago to the world-famous beaches of Waikiki. The sharks here offer up extraordinary behaviour, some seen nowhere else on earth.

Paige Winter was only 17 years old when she lost a leg and portion of her hand to a shark. Experts unpack the details of Paige’s attack to determine what kind of shark is responsible and what can be done, if anything, to avoid this happening again. Despite all Paige has lived through, this inspirational teen remains an advocate for sharks and, with the guidance of professionals, takes brave steps to overcome her greatest fears.

What happens when two of the world’s most deadly and ancient predators go head to head? Drawing on spectacular UGC from around the world, and the latest scientific research, shark and croc experts Dr Mike Heithaus and Dr James Nifong unpack and analyse the evidence. With growing signs, crocs and alligators are pushing far out to sea and deep into shark territory, are clashes on the rise?

* Dates and schedules are subject to change.