Johannesburg 15 June, 2021: The much-anticipated Critter Fixers: Country Vets series will premiere on National Geographic Wild (DStv 182, Starsat 221) on Fridays at 18:00 from 2 July. This six-part series showcases the heartwarming, interesting and often complex veterinary work done by Dr Terrence “T” Ferguson and Dr Vernard Hodges, who together run the Critter Fixers veterinary practices in rural Georgia. The series premieres with a double bill, with one episode airing per week thereafter.

Dr. Ferguson and Dr Hodges are not only extraordinary vets but also lifelong friends. Together with their loving staff, these animal doctors bring real heart, soul and a lot of humour to their treatment and care of more than 20,000 patients a year across their two locations. Between emergency visits to the office and farm calls throughout rural Georgia, this special team is constantly bombarded with unique cases. From adhering Tilapia scales to save an attacked dog to assembling a splint on a rare South American bird, for the Critter Fixer team, there is no such thing as “normal.”

Dr. Ferguson grew up in rural Talbotton, Georgia and discovered his caring nature for animals at a young age, bringing strays in off the streets and actually nursing a dog back to health after it had been hit by a car. With his family’s encouragement, he embarked on a career in veterinary medicine long before college, spending his summers volunteering at local veterinary clinics.

Dr. Hodges was raised in Peach County, Georgia, growing up around lots of animals and developed a passion early on for understanding and helping them. He initially studied fisheries biology. However, soon after graduating, he realized his passion for animals expanded well beyond aquatic species, so he went on to study Veterinary Medicine. 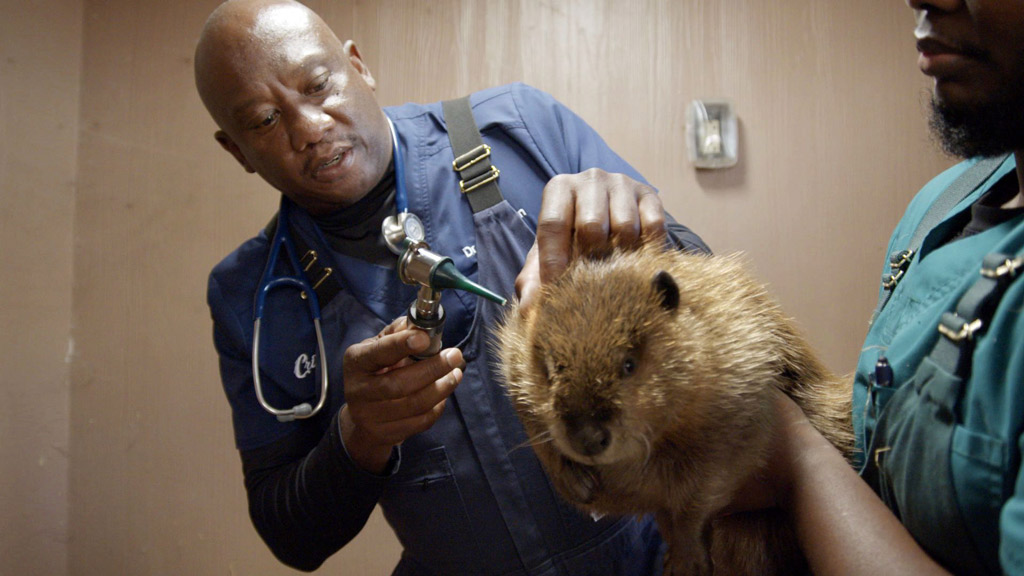 Drs. Hodges and Ferguson work to save a bunny that has been attacked by the family cat and then perform an emergency C-section on a bulldog.

Episode 2. Goose On The Loose

Dr. Hodges is in surgery when an emergency comes to the office. He orders his staff to begin treatment on a newborn baby goat in distress as he finishes surgery on a dog. Meanwhile, Dr. Ferguson handles a snake with pneumonia, and then both doctors head out to treat a goose with a broken leg.

Drs. Hodges and Ferguson are busy with a hospital full of patients and taking care of their clients all over rural Georgia. They take care of the rural Georgia animal population, treating everything from alpaca pregnancies and pig hooves.

Drs. Hodges and Ferguson treat a pit bull that needs surgery on its ear; a dehydrated bearded dragon; and an unruly camel.

The doctors are busy with a hospital full of patients. Unusual pets, such as a chinchilla with a severely broken leg, test the docs’ veterinary skills.

Dr. Ferguson and vet tech Jordan treat a cat with an apparent ear infection, and a stray mama cat arrives in labour requiring a c-section.

“National Geographic Wild showcases the best, most intimate encounters with animals on television and the Critter Fixers – Country Vets series shows us just how important veterinary care is in the lives of the many animals that live among us” said Evert van der Veer, Vice President, Media Networks, The Walt Disney Company Africa. “Dr Ferguson and Dr Hodges treat such a wide variety of patients, and their unique cases together with their delightful personalities, make this series an absolute treat to watch” he added.