Skip to content
You are here
Home > Editor Picks > ‘Car S.O.S’ Returns For Its Tenth Season Including Renovation

10 BRAND-NEW EPISODES PRESENTED BY TIM SHAW AND FUZZ TOWNSHEND TO AIR EVERY TUESDAY AT 19:00 EXCLUSIVELY ON NATIONAL GEOGRAPHIC FROM 26 APRIL 2022

THE 100TH CAR MAKEOVER OF CAR S.O.S FEATURES AN AMBITIOUS TRANSFORMATION OF A PETROL TO AN ELECTRIC CAR

Johannesburg, 12 April 2022: National Geographic’s top-rated car restoration show with a heart, Car S.O.S, returns to screens for its tenth season on Tuesday 26 April at 19:00 (CAT) with 10 unmissable new episodes – including a very special anniversary show featuring the 100th car to be made-over on the series and a stack of celebrity faces who will be popping up throughout the run.

Each new episode features a different heart-warming and inspiring story from owners who deserve the chance to have their treasured classic motor fully restored back to its prime condition, with parts-blagging car enthusiast Tim Shaw and master mechanic Fuzz Townshend who are joined by special guest stars, including ex-England football legends Bryan Robson and Wes Brown, who are on hand to lend their time, energy, and moral support to a very special Car S.O.S reveal at Old Trafford football stadium. Other celebrity Car S.O.S fans who make cameo appearances in the series are David Beckham, Sir Paul McCartney, TV mechanic and motoring specialist Edd China and Emmerdale actress Natalie J. Robb.

The much-anticipated tenth series begins with an incredible makeover of a Fiat Uno Turbo, which was once the pride and joy of Gerry who recently discovered that he was suffering from a rare form of blood cancer, leaving him unable to fix up his car. Gerry underwent several months of chemotherapy which initially helped – however sadly it was then discovered that cancer had spread to his spine. The Car S.O.S team battled through a series of setbacks to get the car back to its former glory, and the result of all their persistence and hard work will leave even the most hardened of petrolheads amazed. 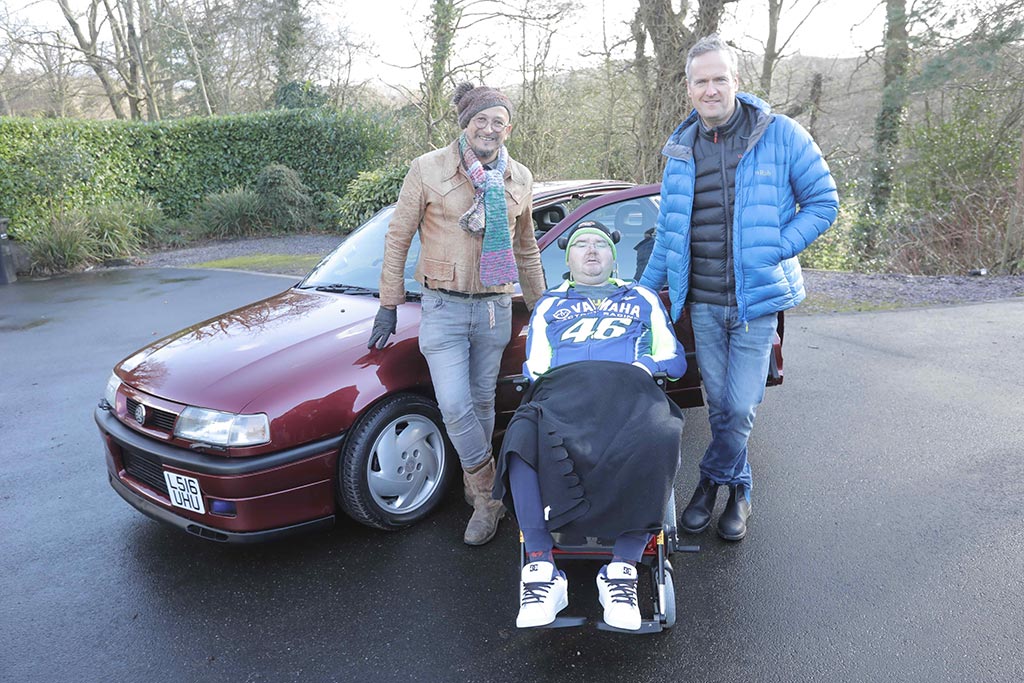 Later in the series, in what promises to be one of the most moving episodes in Car S.O.S history, we follow the story of the Howe family. Contributor Steve’s daughter Darcie was at the Ariana Grande concert at the Manchester Arena when a bomb tore through the lives of those there. Darcie survived, but her mother who had come to collect her was sadly killed. Before the tragic blast, they wanted to restore their 1963 Citroen HY Camionette into a milkshake and coffee van. However, due to the circumstances, they didn’t get around to it. Car S.O.S have stepped in to make it happen. This is one of the biggest Car S.O.S reveals to date, as it took place at Old Trafford Stadium, with the help of ex-Manchester United legends Wes Brown and Bryan Robson.

Also featured in the series is the story of Ash, an electrician from Huddersfield. Ash owned a 1992 VW Corrado, which was his pride and joy. However, after being diagnosed with testicular cancer, and then being close to death from sepsis, Ash was left too weak to be able to keep the car in shape. It ended up rotting away behind an industrial estate. His wife Kristina knew how much the car meant to Ash and wrote to Tim and Fuzz to see if they could help get the car back on the road and bring some much-needed joy into Ash’s life.

Details of the special 100th Car S.O.S renovation are currently under wraps, but audiences can look forward to an incredible makeover of a classic car that is brought back from the brink to live out a new life as a top of the range eclectic car.

The first 8 episodes in the new season are:

Owner Gerry, 55, is a dyed-in-the-wool, through and through petrol head. He used to work for Toyota in their sales department for many years. He lived and breathed cars, when he wasn’t at work selling cars or just talking about cars, he was heavily involved in the custom car scene, going to shows and meets and even dabbling in the odd bit of modding on his own cars. In his time Gerry has owned many vehicles, but the car that was ‘the one’ that he’s now owned for over 30 years, was his beloved Fiat Uno Turbo. He bought it near-new back in 1989 and set about having it modified it to be exactly as he wanted it with a Ferrari style plastic body kit from front to back, low profile alloys, uprated suspension and respraying the car metallic blue. It was very much his baby and he liked nothing more than taking to meets and showing it off to his mates. Over time however the badly fitted body kit started to peel off and the thin Italian steel underneath to rust badly. Gerry’s pride and joy very quickly started to turn into a dog’s dinner. Gerry still had plans to restore the car and drive it again but then something happened to it – a stop to his dreams in their tracks. 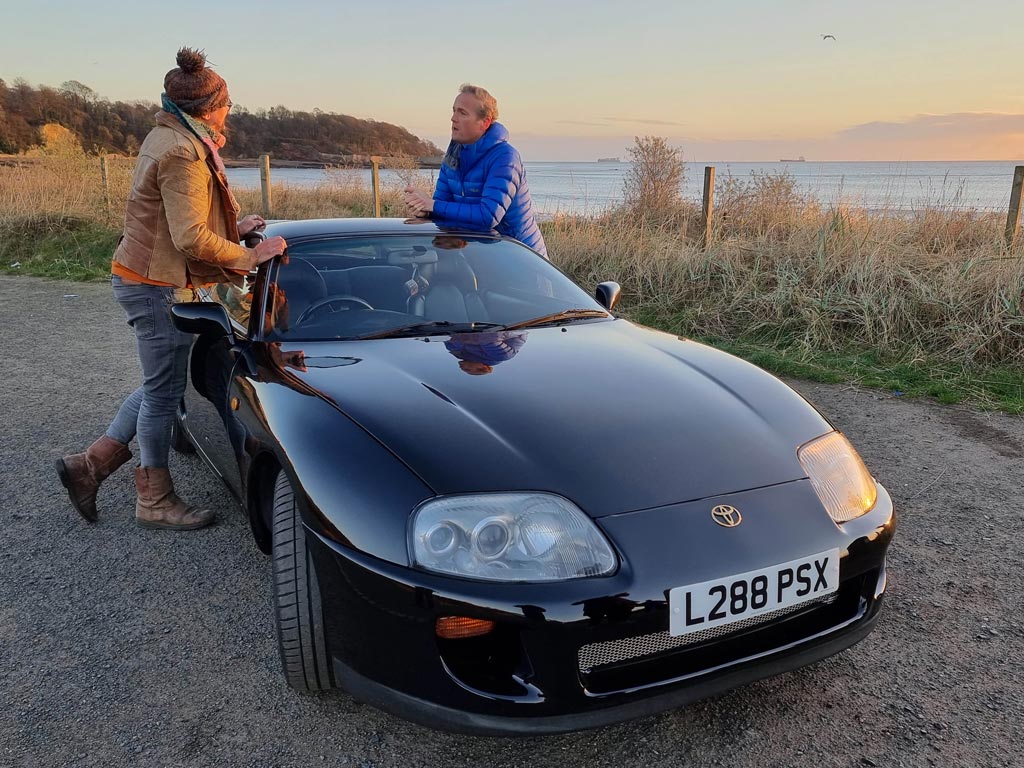 The 1980’s Italian car is a rusty mess. The body kit on the front and rear wings have completely come away and the steel would appear to have dissolved into nothing. This will be a major reconstruction and parts for these cars are not easy to come by so it will involve a lot of fabrication. The body kit will have to be put back on – something we’ve not done before on Car SOS so if it can’t be salvaged it will also have to be fabricated which may require a very large 3D printer. The engine will need a full rebuild and the turbo will need refurbishing. The interior is dirty and tired but may clean up, if not a new set of bucket seats would suit. This car is very bespoke to its owner so will require a sensitive approach. 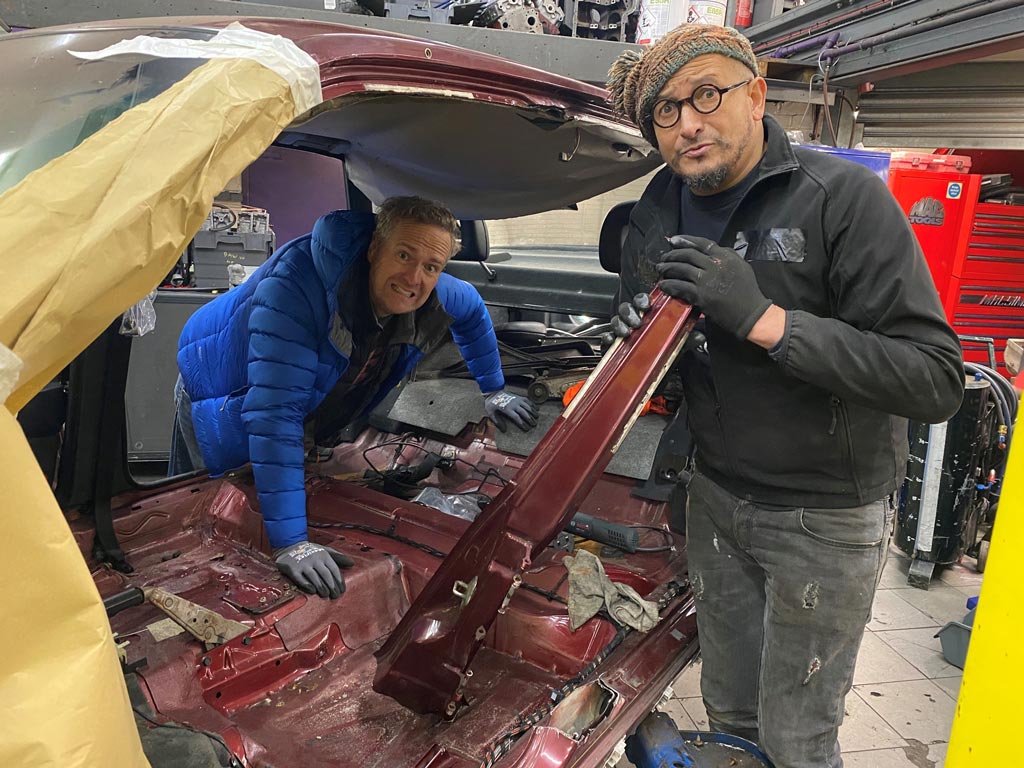 About three years ago Gerry’s legs started to balloon and he was diagnosed to be suffering from water retention, this then led to extreme tiredness, to the point where he could barely move about. He had to give up his job, but the doctors were initially unable to work out the cause of the problem and put it down to type 2 diabetes. Gerry was sent for test after test until eventually it was discovered that he was suffering from a rare form of blood cancer, a little bit like leukaemia, which was causing his body to not produce enough white blood cells and therefore causing him to have a failure of his immune system. Gerry underwent several months of chemotherapy which initially helped his blood cancer – however more recently at one of his regular tests, it was discovered that Gerry now has Myeloma another form of bone marrow cancer which this time sadly has spread to his spine where tumours are now starting to form in his spinal cord. The tumours are inoperable and there is now no further treatment available meaning Gerry will soon start to suffer from paralysis. He has been told his condition is terminal. Gerry is married to Sally and has one son. His two friends Fergus and Kev wrote into Car SOS desperate for Gerry to have one last drive in his pride and joy before it is too late.