The album American Nightmare by Fang is now out and available for the first time ever, available on all digital download & streaming platforms!

All original recordings from the 1998 release, originally released on Wingnut Records, are now digitally available through Die Laughing / Golden Robot Records. This record has been very hard to find and this digital release is a long time coming. American Nightmare is a must for all Fang and hardcore punk fans!

“1996 After spending 7 years in some of the worst prisons in the USA, for a horrible crime, I was released onto the streets a changed man. I had not planned on ever getting Fang back together but with the urging of many and a longing to make music again, I rebuilt Fang in 1997 with Josh Levine (Bass), Greg Langston (Drums) and Bill Burnett (Guitar).  American Nightmare is the culmination of that rebirth. Most of the lyrics on the record were written while I was still incarcerated. It is a window into the past, a window into the California penal system and the violence and brutality of the CDC with songs like Electric Chair and City of Pain. It is also a Fang record in that there are moments of pure sarcasm ie; Eat a Vegan and Motor City Drag Queen. As well as a hard look at the punk rock scene in the city of Sacramento and the war that was raging there at the time – Pride. 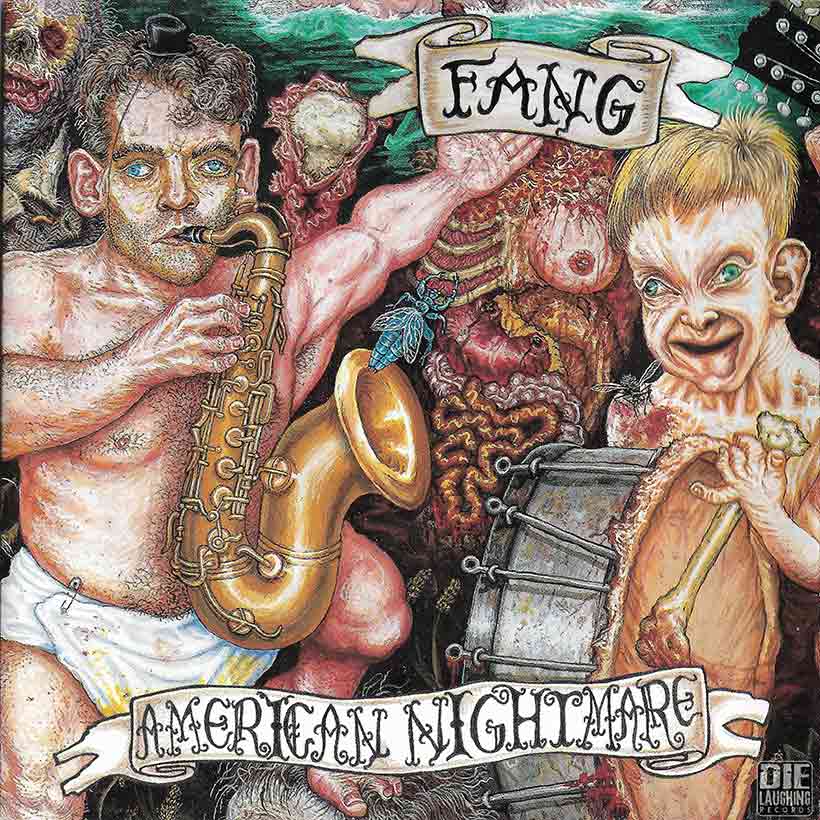 American Nightmare was slated to be released in 1998 but Wingnut records closed their doors forever and all the records, CDs and cassettes were locked away in storage for many years. With mind blowing cover art by Joe Coleman and incredible production and engineering by Jason Carmer it was sad that the record never really saw the light of day…. Until now.’’ – Sammytown, FANG

Among the leaders in the West Coast’s hardcore scene, Fang has influenced many bands and many high-profile bands have covered Fang material. Mudhoney, the Butthole Surfers, Metallica, and Nirvana all covered The Money Will Roll Right In, and I Wanna Be On TV was covered by Green Day. Founding guitarist Tom Flynn‘s distinct guitar playing has also influenced many followers, including those in the grunge genre.

And while we can’t claim Fang is the ‘hardest working band in show biz’, we do know that they are one of the most enduring and productive hardcore bands ever!

Sammytown and Fang were also profiled in the documentary Turn It Around: The Story of East Bay Punk.